I just found this post on the Best of Craigslist.
Sort of a primer for how to deal with people with cancer. 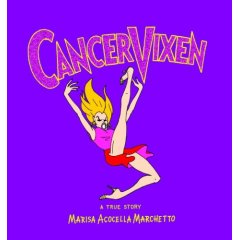 Over the last few years I have been exploring the delights of the graphic novel and recently, at my beloved neighbourhood branch of the local library, I stumbled upon a graphic novel called “Cancer Vixen” by a woman named Marisa Acocella Marchetto.

Now, at first glance, me and Marissa couldn’t be more different.
She lives in the heart of the chaos and glamour of NYC. Suffice to say that I do not.
She is a cartoonist for The New Yorker. Not wishing to disappoint, but I am not this.
She is quite clearly heterosexual. Absolutely, without a doubt, I am not.
She describes herself as a “shoe crazy, lipstick-obsessed, wine-swilling, fashion fanatic, single-forever-about-to-get-married with a fabulous life finds… a lump”
Of the above, I can only kinda sorta claim one of those descriptors as coming close to me and my experience.
So, yeah, she is a living the high life, life full of glamour straight girl who finds a lump in her breast and then talks about what comes after.

And the thing with cancer is, if your identical twin had the same sort of cancer that you had, God forbid for both of you, you would each have wildly different experiences.
What is freaky for me about this graphic novel is the ways we had very similar experiences, in spite of our crazy differences.
She got engaged to be married and then got diagnosed with cancer. Me too.
She, and this is almost too much for my tiny brain to cope with, got diagnosed within two days of me. It’s actually possible we were diagnosed on the same day. And on some level, that makes sense, if you think about how many people in this big old crazy world have the unpleasant experience of being told they have cancer, well, for sure, some of us mouthy ones are bound to overlap with each other and then blab about it publicly. Still. To see in print that some gal got that soul crushing news on the same calendar day as you, well, it messes with your head.
She had breast cancer. I had ovarian cancer.
Hers was in the 1st stage. Mine was 3 C. Pretty different.
She was self employed with no health insurance. I was looked after by my government’s healthcare plan, my extended benefits and a bunch of people who cared about me.

Here’s a confession.
I am not sure anyone who has had cancer, no matter what its outcome, can accurately explain that experience to anyone who hasn’t stared at the ceiling of their room, wondering how it might work out and if they are gonna croak, right in that room, sometime far too soon.

I may be wrong. I would be happy to be wrong. My opinion is far from carved in stone. But I think that, really, at the end of the day, cancer is the thing that everyone fears and, when someone tells you that you have it, you become a wee bit different than regular people. I may be wrong about all that. But I don’t think so.
So, in spite of our many and significant differences, me and old Cancer Vixen had some freaky areas of overlap.
Or perhaps it would be more appropriate to say that she, more than anyone else I have read to date, captures some of the crazy, deep, chasms of emotion one explores when you parachute in to cancer land.

Marisa Acocella Marchetto does a great job of describing those moments where you feel crippled with guilt because your loved ones are going to panic, so you try to make it all be okay, cuz it feels awful to cause so much pain and stress to the people that you love but you can’t do jack to make it different and neither can they.
She talks about the terror and the grief you feel when you think, “Ah, right, I was supposed to get married but it looks like I will just my love on an amazing hellride instead. Buckle up, baby, the road gets bumpy ahead.”
The “wow, my life was actually bordering on being perfect and then this crazy shit happened to me.”
She does a great job of portraying the way some people just jump up and want to do whatever they can to help.
She does an equally great job of explaining how some seemingly well intentioned people can say all the wrong ‘blame the victim’ sort of things and all you can do is paste a smile across your sickly hairless head.
She talks about how hard it is to lose your hair.
Let me just say, for me, as a big bad dyke, I didn’t think it would be as bad as it was for other people, especially other women. Plus a handful of friends came by and had their heads shaved on the same day I did mine.
Thanks. My eternal thanks to that group who stepped up and tried to make that easier for me.
Because it was really awful. I thought being all queer and outside of the box in every sense, it would be okay. But it was such a huge issue for me. Being hairless was the equivalent of being the modern day eunuch and it almost killed me, from an ego point of view.
So when a shoe loving, fashion-diva straight girl talks about her struggles, I say, “Oh yeah, sister.”
She also, bless her highly fashionable boots for this, talks about chemo brain and memory loss.
I have googled ‘chemo brain’ and come up with squat.
But here’s the thing, a very candid moment….
Chemo ate my memory, there is no doubt about it in my mind.
But my mom died of Alzheimers’, so, when I don’t remember to hand in an assignment or that I should meet you at the movies and didn’t show up or that we already had this stupid conversation and you can’t believe I don’t remember that, I don’t always know which to chalk things up to.
But I do know, on a core level, that losing your memory sucks like few other things.

Anyway, you should read this book. I think you should.
If you can’t get it from your local library, it’s only 11 bucks from the dreaded and diabolical Amazon.ca

Spike
spewing out 3 posts over 4 days… but don’t get used to it, folks, I’m just not that reliable.

** This post was generously sponsored by the words “freaky” and “crazy”.