Filed under the heading of

“Oh crap, sorry about that.”

From Wednesday’s Globe and Mail

Drugs commonly given to cancer patients because they are anemic after chemotherapy appear to increase their risk of dying, according to a new study.

The research, published in today’s edition of the Journal of the American Medical Association, suggests that the drugs, called erythropoiesis-stimulating agents (ESAs for short), may actually provide fuel to cancerous tumours.

“It’s troubling that 15 years after the drug came out, we finally came to this realization,” said Charles Bennett, an oncologist at Northwestern Memorial Hospital in Chicago and lead author of the study.

He said accepted practice is that using ESAs in moderation is safe but the new research challenges that view, “raising the concern that the drug may be stimulating cancer and shortening cancer patients’ survival.”

The new study is a meta-analysis, a compilation and analysis of previously published research. A total of 51 studies were included with 13,613 patients.

The analysis showed that patients who received ESAs to treat anemia had a 10-per-cent increased risk of death compared with cancer patients who did not receive the drugs.

Anemia is a common side effect of chemotherapy. Chemotherapy helps kill cancer cells, but it also eliminates good, healthy ones such as blood cells. It can decrease red blood cell levels, causing anemia and exhaustion.

Anemia can be treated with blood transfusions, but, in recent years, it has become common practice to treat the condition with one of two drugs, erythropoietin or darbepoetin, which stimulate production of red blood cells.

Last year, the U.S. Food and Drug Administration issued a public health warning about ESAs, particularly their use in cancer patients not undergoing chemotherapy.

Safety concerns are related to the fact that these drugs can cause life-threatening blood clots.

The new study confirms that concern, showing that patients receiving ESAs see their risk of blood clots in the legs or lungs jump by 57 per cent.

About 7.5 per cent of cancer patients treated with ESAs developed blood clots compared with 4.9 per cent who took placebos in the study. Dr. Bennett said that the increased rate of death does not appear to be due to blood clots, but rather by a return of cancer.

Another researcher involved in the study, Stephen Lai, an assistant professor at the University of Pittsburgh Medical Center, did laboratory work that showed cancer cells were stimulated when he exposed them to ESAs.

“We saw dramatic change,” he said. “Giving cancer patients EPO [a type of ESA] for their anemia may actually cause their tumours to progress.”

Dr. Bennett said he believes the findings should have an influence on clinical guidelines and oncologists should rethink their use in cancer patients.

“If I had cancer and needed a blood transfusion, I would be much more conservative about taking ESAs,” he said.

ESAs such as darbepoetin (brand name Aranesp) and erythropoietin (brand names Epogen and Procrit) are used to treat kidney disease as well as chemotherapy-related anemia.

According to the paper, ESAs generate sales of more than $6-billion (U.S.) annually in the United States.

This just in from the Scientific American

NEW YORK (Reuters Health) – Among women with BRCA1 gene mutations, which are known to increase the risk of breast cancer, annual screening with both mammography and MRI is associated with better survival when compared with screening with either method alone, new research indicates.

The trade-offs, however, are a high rate of false-positive results, which lead to unnecessary biopsies.

The results indicated that annual combined screening with mammography plus MRI increased the average life expectancy by 1.38 years compared with follow-up only without screening tests (clinical surveillance). The false-positive rate was 84.0 percent.

In the general population, the lifetime risk of breast cancer for women is 13 percent. In BRCA1 mutation carriers, by contrast, this risk can be as high as 80 percent. Strategies to reduce this high risk have included preventative mastectomy, removal of the ovaries (to lower levels of estrogen which can encourage breast cancer growth), preventive chemotherapy, and more frequent office visits, according to the report in the journal Radiology.

Younger women, especially those of childbearing age, are often reluctant to undergo preventative mastectomy, the investigators point out. Preventative chemotherapy might be a suitable choice, but unfortunately no studies to date have shown it to reduce breast cancer mortality. That leaves increased surveillance.

According to the report, mammography is not nearly as sensitive at detecting breast cancers in BRCA1 mutation carriers as it is in the general population. Previous research has shown that MRI can achieve higher sensitivity than mammography, but whether this translates into reduced breast cancer mortality is unclear.

Due to the long length of follow-up and the large number of patients required, the authors note that it is unlikely that any trial will ever investigate whether MRI screening can reduce breast cancer mortality. This prompted Lee, from Massachusetts General Hospital in Boston, and colleagues to conduct the current decision analysis.

The average life expectancy was 71.15 years, the report indicates, and with clinical surveillance alone, the average diameter of breast cancers at diagnosis was 2.6 centimeters. Using annual screening with mammography, MRI, or both, the average tumor diameter at diagnosis fell to 1.9, 1.3, and 1.1 centimeters, respectively.

Compared with clinical surveillance, all three imaging-based screening strategies increased life expectancy and reduced mortality from breast cancer. Again, the most pronounced benefit was with mammography plus MRI.

In addition to the high false-positive rate seen with mammography plus MRI screening, nearly one in three women underwent one or more biopsies for what turned out to be benign disease. The false-positive rates and negative biopsy results with the other screening strategies were also increased, but not as high as that seen with the combined approach.

More research is required to find the optimal sequence and frequency for screening tests for breast cancer, and to “minimize the potentially negative effects on women’s health-related quality of life when screening with increased intensity is pursued,” Lee noted.

She added that her team is “currently working to extend our model of breast cancer natural history and screening in BRCA1 gene mutation carriers to women who carry BRCA2 mutations, and women whose lifetime risk of breast cancer exceeds 20 percent — these women are defined by the American Cancer Society as being at ‘high-risk’ of developing breast cancer.”

Phase III evaluations have begun on a blood test developed by
researchers out of the Yale School of Medicine. So far the test has
detected newly diagnosed ovarian cancer with 99.4 percent accuracy by
using six protein biomarkers. “We hope this test will become the
standard of care for women having routine examinations,” says lead
author Gil Mor, M.D., associate professor at the department of
Obstetrics, Gynecology and Reproductive Sciences at Yale.

The test requires further study and extended follow-up with more
patients, however the news represents an encouraging development in the
search for a reliable, early detection test for ovarian cancer. Results
from the phase II clinical trials were published in the February 15
issue of the journal Clinical Cancer Research.

I’m not really sure I can nail down a starting point for this post. But I just received an e-mail, reminding me that a year ago one of my OVCA buddies died. She was one of those online support comrades, another one I never met in real life and another one who died too soon. This online support thing is a bit strange to me, because the wellbeing of a bunch of people I have never met means so much to me. It’s a good thing, it just continues to surprise me with its intensity.

There has been a lot of death and grief in my life over the last couple of years and there is not much I can do about those circumstances except try to maintain some sort of point of view that allows me to squeeze out some smidgen of something positive. Often, I fail miserably at this goal. But one thing that is important to me is that we remember the people we have lost.
So, today, I thought I should do something to remember Heather MacAllister. This is a snippet from what I wrote a year ago.

“Heather was a Fat/Social Justice Activist and the founder of the Fat Bottom Revue, a burlesque troupe full of really hot fat grrrls. 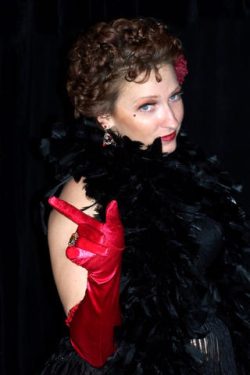 So, in anticipation of Valentine’s Day, how about we all do like she says and try to, you know, love one another or at least be more kind to each other. What could it hurt?

It certainly has been a wild ride these last few years and I find myself becoming reluctant to talk about any of the details of my ever so melodramatic life because it all seems so very over the top. It’s been hard. I guess I am just paying in advance for the salad days that are just over my horizon. When my address changes to “General Delivery, Easy Street, Vangroover, BC Canada”
I’d like to believe that.

Anyway, not to come out and sucker punch folks now that I have you thinking about other stuff but my dad died last week.
I haven’t really been talking about it because I can’t really think of anything to say about it. It’s all sort of surreal, and then that sounds like a stupid thing to think since the man has been dreadfully ill for the last couple of years. I sort of think that since my mom died, he didn’t think there was so much left to fight for. I dunno. I do tend to believe that he finally gave himself permission to let go, but I wasn’t there and I don’t really know what happened inside his head.

Anyway, he’s gone.
And she’s gone.
I confess, I don’t harbour images of a verdant and pastoral place where they are goofing around now, but I’d like to. If he threw in the towel because the woman he loved his whole life was gone, then I hope that somehow, they get to be 18 and together again.

Rodger Dodger
over and out.